After last years performance at Guilfest 2009, Tom Upton has been asked back to play on Friday 16th July alongside Tall Paul!

If you missed what happened last year, check out the below video! 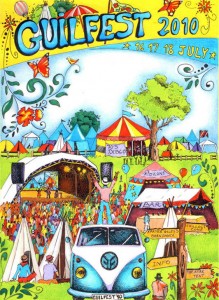 DJ legend, Tall Paul, is confirmed to appear in The Funky End Dance Tent at GuilFest 2010 on Friday 16th July. Having begun his DJ career in the 80s, Paul has played at clubs and parties all over the world, and released numerous successful tunes over the last 20 years including remixes for artists as diverse as The Human League, New Order, Bizarre Inc, Energy 52, Keane and The Killers. Paul has even won the much coveted “Muzik DJ of the year”, and has been regularly voted as one of the worlds top 100 DJs in the DJ mag top100 since it began in 1997. His success has also been replicated overseas, with him being voted as 8th best DJ in America in BPM magazine in 2006.