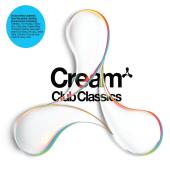 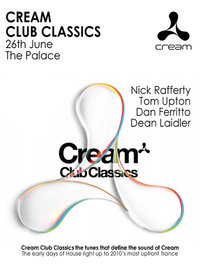 After the massive success of the CREAM ANTHEMS night, Tom has been asked back to play for the official Cream Club Classics night being held on the 26th June 2010.

The Palace is proud to announce the legendary superclub ‘Cream’ are back for the launch of their club classics album.

This night is going to be another sell out! Those of you who made it to the last event will tell you just what you missed out on!!

Here is what you missed last time.

Cream, from its origins in Liverpool to festivals held worldwide, is the global clubbing super brand responsible for influencing the lives of millions. Cream Club Classics is the album that defines the sound of this revered institution, raising the bar from past outings (which have sold in excess of one million) by providing a complete collection of seminal tracks. Set across 3 CDs is some of the greatest dance music ever made, from the early days of House right up to 2010’s most upfront Trance.

Disc 1 punches in as an upbeat trip through the best nights of any clubber’s life. Featured are timeless pioneers like Basement Jaxx, The Prodigy, Armand Van Helden and Way Out West, along with massive tracks that changed clubland forever: Ultra Naté ’Free’, The Nightcrawlers ’Push The Feeling On’, Azzido Da Bass ’Dooms Night’ and Olive’s number 1 ’You\’re Not Alone’.

The second disc starts with the smooth offerings of Deep Dish, before picking up the pace with the epic Robert Miles ’Children’, Grace ’Not Over Yet’ and Kosheen ’Hide U’. The mix reaches fever pitch with heavyweights Fatboy Slim and Underworld. By CD 3 the gods of Trance take over to finish on a bang, with the colossal Faithless, Mauro Picotto, Chicane and Paul van Dyk. Representing the cutting edge is the brand new TV Rock along with Tiësto’s 2010 reworking of System F.

Cream Club Classics provides an epic journey through the tracks that helped Cream achieve its legendary status, the soundtrack to a global clubbing phenomenon.