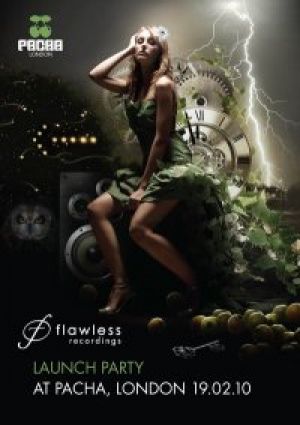 Flawless celebrate the launch of their brand new label Flawless Recordings on Friday 19th February with a glamorous event at the UK’s finest club – Pacha, London.

We have pulled out all the stops for this exclusive event. Flying over from Canada playing his UK Debut will be Canadian producer ImanoS.

ImanoS is one of the hottest up and coming DJ’s & Producers hailing from Canada. With he’s soon to be released track “Be Loved” which is making waves around the world we are proud he has chosen Flawless to make his UK debut.

Also in the main room fresh back from his I am Stereo world tour will be Rob Wilder. This man really does need no introduction if you have seen him play you will know how well he always delivers.

Completing the headliners in the main room will be none other than Hed Kandi’s top resident John Jones playing alongside the Flawless resident djs.

There will also be on the night a very special live PA by Lia Rae performing a world exclusive of her new track signed to Flawless Recordings entitled Fused feat Lia Rae – “French Kissing”.

Tom Upton at Guilfest 2014
June 6, 2014
Add Me on Facebook
Latest Podcast
Find Me On Spotify
Go to Top